Here To Help You

The Shoreline on Beach, offers a rare and incredible opportunity to live on Peachland's most sought after waterfront street. An exclusive collection of 7 stunning...
View details... 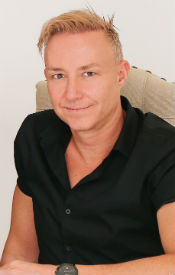 Chad grew up in Maple Ridge, BC before moving to London, England where he lived for 18 years until buying a holiday residence in the Okanagan in 2016. He fell in love with the area and decided to make it his full-time home. In London Chad ran his own company as a Talent Producer in Television & Events. Chad worked directly with some of the biggest stars on the planet, working world-wide from the US to India to Africa and all over Europe producing shows including The British Academy of Film Awards, GQ Awards, Glamour Awards and many other high-profile events and television programs. After deciding to make the Okanagan his new home he knew he needed to forge a new career and with his passion for property and his love for working with people Real Estate was the only choice for him. Chad prides himself on his honesty, his openness, his professionalism and his love for people from all walks of life and cultures. A hard worker with a determination to make people happy you can 100% always rely on Chad to have your back and to work hard for you when selling or buying property in BC. If you’re looking to buy or sell outside of BC, then Chad is happy to refer you to the best International Realtors anywhere in the world.

Site Design is a copyright myRealPage.com Inc. All rights reserved.