Canadian home sales edge up from September to October

Home sales recorded over Canadian MLS® Systems fell by 3.9% between August and September 2022. From May through August, month-over-month declines have been progressively smaller. The September result marked a slight increase in the current sales slowdown that began with the Bank of Canada’s first rate hike back in March. (Chart A)

While about 60% of all local markets saw sales fall from August to September, the national number was pulled lower by the fact markets with declines included Greater Vancouver, Calgary, the Greater Toronto Area (GTA) and Montreal.

The actual (not seasonally adjusted) number of transactions in September 2022 came in 32.2% below that same month last year and stood about 12% below the pre-pandemic 10-year average for that month. 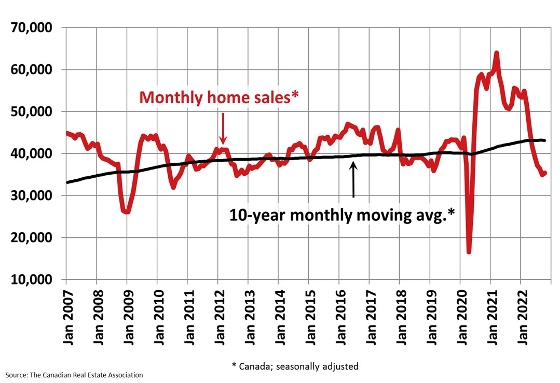 “In October, sales across the country increased for the first time since before interest rates started to rise last winter,” said Jill Oudil, Chair of CREA. “Of course, we’ve known the demand was there, so it’s just been a matter of some playing the waiting game as borrowing costs and prices have adjusted. Moving into 2023, sellers and buyers will likely continue coming off the sidelines, but it’s a very different market compared to just one year ago. As always, for information and guidance about how to navigate the current marketplace, your best bet is to contact your local REALTOR®,” continued Oudil.

“October provided another month’s worth of data suggesting the slow down in Canadian housing markets is winding up,” said Shaun Cathcart, CREA’s Senior Economist. “Sales actually popped up from September to October, and the decline in prices on a month-to-month basis got smaller for the fourth month in a row."

The number of newly listed homes was up 2.2% on a month-over-month basis in October, with gains in the Greater Toronto Area (GTA) and the B.C. Lower Mainland offsetting declines in Montreal and Halifax-Dartmouth.

With sales up by a little less than new listings in October, the sales-to-new listings ratio eased back to 51.6% compared to 52% in September. The long-term average for this measure is 55.1%.

The Aggregate Composite MLS® Home Price Index (HPI) edged down 1.2% on a month-over-month basis in October 2022, the smallest decline since June.

The non-seasonally adjusted Aggregate Composite MLS® HPI edged down 0.8% on a year-over-year basis in October. (Chart B) 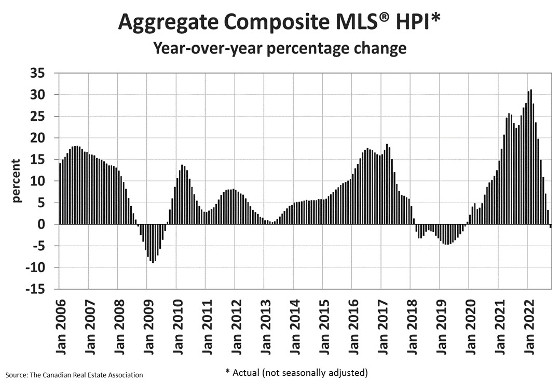 The actual (not seasonally adjusted) national average home price was $644,643 in October 2022, down 9.9% from the same month last year. The national average price is heavily influenced by sales in Greater Vancouver and the GTA, two of Canada’s most active and expensive housing markets.

Excluding these two markets from the calculation cuts almost $125,000 from the national average price.